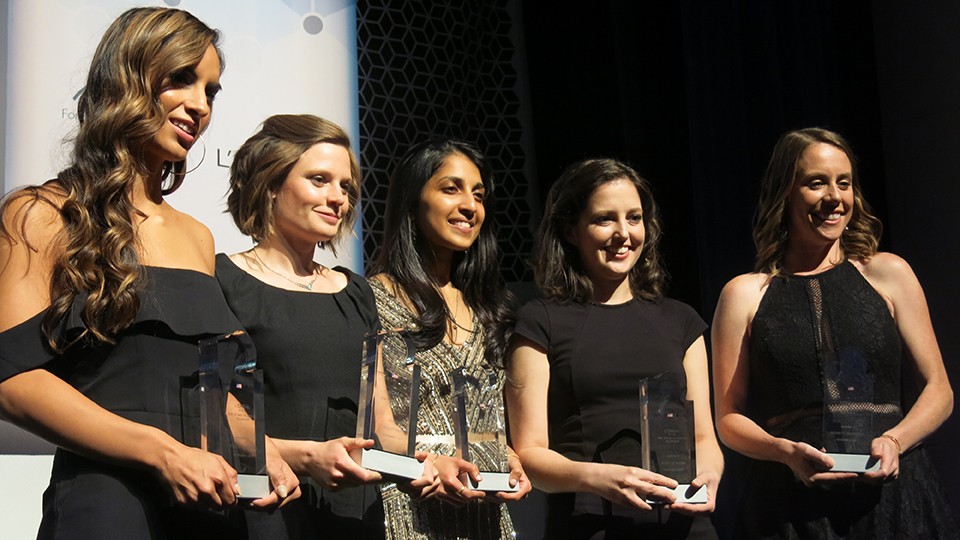 I have been following L’Oréal USA closely in my efforts to get a workshop/office visit to their Head office in New York or their Research & Innovation facility in Clark, New Jersey. Recently I came across an article on their ongoing efforts to promote women in STEM.

On October 10, 2017 L’Oréal USA announced the five recipients of the 2017 For Women in Science Fellowship, an award that honors female scientists at a critical stage in their careers with $60,000 grants to advance their postdoctoral research. Celebrating its fourteenth year in the U.S., L’Oréal USA’s For Women in Science fellowship program has awarded 70 postdoctoral women scientists over $3.5 million in grants. The announcement is being made in conjunction with Ada Lovelace Day – an annual event aimed at raising the profile of women in science, technology, engineering and math (STEM).

The five 2017 fellows being honored are known for their extraordinary research across a wide range of fields – from genetics to quantum physics. This year’s awards will recognize and support the following female scientists and their research:

Kellie Ann Jurado is a postdoctoral scientist in Immunobiology at Yale University. Ms. Jurado’s research focuses on the Zika virus (ZIKV) as she is seeking to understand how ZIKV causes damage to the nervous system, which is critical to developing treatments. She hopes the grant will support her work on “Cut the Risk,” an educational campaign on sexual and reproductive health, with a special emphasis on the benefits of the HPV vaccine, targeting minority communities which she is developing with several partners at Yale Medical School and Yale New Haven Hospital. A beneficiary of STEM outreach programs herself, Ms. Jurado has been dedicated to increasing the participation of underrepresented minorities and women in STEM throughout her career, most recently serving as a volunteer teacher in an after-school program in Connecticut. Ms. Jurado, 30, received a Ph.D. in Virology at Harvard University and a B.S. in Biology and Microbiology at New Mexico State University, where she graduated first in her class. Ms. Jurado was born and raised in New Mexico, and currently lives in Connecticut, with her husband where she enjoys exercising and cooking in her free time.

Felicity Muth is a postdoctoral fellow in Biology at the University of Nevada, Reno. where her research focuses on animal behavior and cognition, which is the study of how animals think, learn, and make decisions. Of late, Ms. Muth is conducting research in the lab and in the field to understand how commonly-used pesticides (neonicotinoids) are affecting bumblebees’ foraging and pollination behavior. Since bees are major pollinators of both wild flowers and crops, this question has implications for natural ecosystems and human food security. Female mentors were critical in Ms. Muth’s decision to pursue a career in science, and, in turn, mentoring female students has played a substantial role in her scientific career. She has collaborated with the Girl Scouts of the Sierra Nevada and Nevada Bugs and Butterflies and will use some of her fellowship funding to organize outreach activities for young girls through these organizations. Ms. Muth, 29, received her Ph.D. in Biology from the University of St. Andrews and a degree in Zoology from the University of Edinburgh. Born and raised in London, England, Muth now resides in Reno, Nevada and enjoys rock climbing and hiking in her free time.

Ritu Raman is a postdoctoral fellow in Mechanical and Biomedical Engineering at the Massachusetts Institute of Technology and her research focuses on the design of new smart materials that dynamically respond and adapt to their environment. Most specifically, Ms. Raman is developing these smart materials and using them to transform the way we deliver medication to people through the creation of a long-lasting pill device that delivers oral medication more reliably, cost-effectively, and efficiently. Ms. Raman has been passionate about inspiring girls and women in STEM fields throughout her career, including helping found and grow the University of Illinois chapter of the Graduate Society of Women Engineers. Ms. Raman, 26, received her Ph.D. and M.S. in Mechanical Engineering from the University of Illinois at Urbana-Champaign and a B.S. in Mechanical Engineering with a minor in Biomedical Engineering from Cornell University. Born and raised in India, Kenya, and throughout the United States, Ms. Raman now resides in Cambridge, Massachusetts where she enjoys writing, running, and being outdoors in her free time.

Sydney Schreppler is a postdoctoral fellow in Physics at the University of California, Berkeley and is working to study and measure superconducting qubits, which are tiny circuits that mimic the behavior of the smallest particles in the world. She hopes that by furthering our understanding of superconducting qubits we can improve today’s devices that rely on precise measurements including microscopes, GPS satellites, MRI machines and computers. Having personally benefitted from her experience as a research assistant early in her career, Ms. Schreppler hopes to use the grant to hire a female graduate student mentee who will receive hands-on training and the opportunity to contribute to this innovative study. Additionally, the fellowship will enable Ms. Schreppler to build new experiments with superconducting qubits by supporting materials and manufacturing costs. Ms. Schreppler is committed to mentoring women within and outside of STEM. In addition to serving as the postdoctoral coordinator for the Society of Women in the Professional Sciences at UC Berkeley, she also serves as the head coach of the school’s women’s club lacrosse team. Ms. Schreppler, 29, received her Ph.D. and M.A. in Physics from UC Berkeley and a B.S. in Physics from Yale. Born and raised in Delaware, she now lives in Berkeley, California where she enjoys hiking, road biking, camping, and skiing in her free time.

Molly Schumer is a postdoctoral fellow in Genetics and Evolutionary Biology at Harvard Medical School where her research focuses on investigating how evolutionary forces shape our genes. Specifically, she is working to understand why a trait that can cause melanoma has persisted in swordtail fish for over a million years and through this research, she hopes to identify signals that may ultimately help us learn the genetic and evolutionary causes of diseases. Ms. Schumer has been passionate about science education throughout her career including working for two years as a Teach for America sixth grade science teacher in rural Mississippi and plans to work with local schools to start a coding program for middle and high school girls. Ms. Schumer, 30, received her Ph.D. in Evolutionary Biology from Princeton and B.S. in Biology from Reed College. She grew up in Enumclaw, Washington, and currently lives in Cambridge, Massachusetts with her husband where she loves to hike, run, travel, and cook in her free time.

The L’Oréal-UNESCO For Women in Science International Awards was created in 1998 and is a global program that recognizes and rewards women scientists around the world. Specifically, the program recognizes women researchers for their contributions to the advancement of science, technology engineering and mathematics (STEM) fields, where women still remain underrepresented. Through the international program and the nearly 50 national and regional programs, such as the L’Oréal USA For Women in Science program, more than 2,500 female scientists from over 100 countries have been granted fellowships to pursue promising research projects.

L’Oréal USA hosted an awards ceremony for the fellows emceed by CBS This Morning Co-Host Norah O’Donnell at the French Embassy in Washington, D.C. on November 9, 2017. The fellows had the opportunity to engage with L’Oréal and other STEM leaders throughout the greater New York and Washington, D.C. communities the week of Nov. 6th leading up to the ceremony. It began with visits to L’Oréal USA’s corporate headquarters at Hudson Yards in New York City as well as its Research & Innovation facility in Clark, New Jersey. Fellows also participated in a mentoring session with students at Harrison Elementary School in Roselle, N.J. where they guest-taught alongside L’Oréal scientists before heading to Washington, DC. There, fellows attended “In Pursuit: An Atlantic Summit on Women & Science”, which is underwritten by L’Oréal USA as part of the company’s efforts to further the conversation on the importance of increasing women’s representation in STEM fields. Later, the fellows joined AAAS Science & Technology Policy Fellows on Capitol Hill for an informal gathering on science policy and careersand also visited the National Academies of Sciences, Engineering & Medicine (NAS) where they participated in a roundtable discussion on the barriers and opportunities for women in science with the NAS Committee on Women in Science, Engineering and Medicine.